The Effects of Hearing Loss on Dementia: Innovation in Memory Care Community Culture

The statistics surrounding Alzheimer’s and other dementia diagnoses are staggering. According to the Alzheimer’s Foundation, “It is estimated that about half a million Americans younger than age 65 have some form of dementia, including Alzheimer’s disease.”

In the United States, Alzheimer’s is the 6th leading cause of death. “Researchers estimate that 4.7 million Americans age 65 and above suffered from Alzheimer’s in 2010, a number expected to triple to approximately 13.8 million by 2050,” according to Senior Housing Business.

Combine those statistics with the drastically increasing rates of hearing loss. Research from the World Health Organization (WHO) show approximately one in three people between the ages of 65-74 have hearing loss, and nearly half of those 75 years and older have difficulty hearing. Hearing loss continues to be the silent epidemic plaguing millions of people every single day. 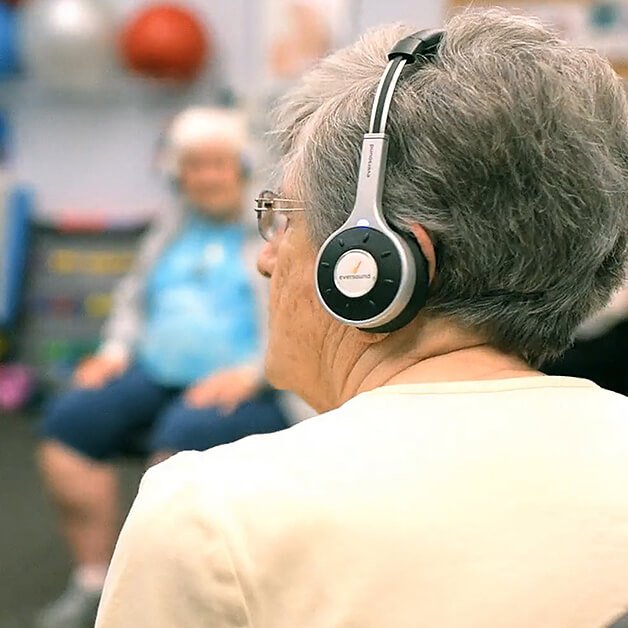 The rising rates of hearing loss and dementia are not a coincidence. A growing body of research has identified the correlation between untreated hearing loss with impaired memory and diminished cognitive function. According to Brandeis University Professor of Neuroscience, Arthur Wingfield:

“Even if you have just a mild hearing loss that is not being treated, cognitive load increases significantly. You have to put in so much effort just to perceive and understand what is being said that you divert resources away from storing what you have heard into your memory.”

Studies from Johns Hopkins University “found that hearing loss is associated with accelerated cognitive decline in older adults and that seniors with hearing loss are significantly more likely to develop dementia over time than those who retain their hearing.”

The physical, psychological, social and economic effects of dementia have significant impacts on individuals, families, and caregivers. Often times, families and individuals turn to long-term care communities for further caregiving needs. Nearly 40% of residents living in long-term care services are diagnosed with Alzheimer’s disease or other dementias.

As demand for memory care services have grown, so too have the number of building and communities needed to accommodate, and the environments and culture within them. By the end of 2016, 113,000 memory care units were spread across the top 140 markets, according to the National Investment Center for Seniors Housing & Care (NIC).

How are these long-term care communities addressing the environmental accommodations — particularly those related to hearing loss — for individuals suffering from Alzheimer’s or other dementias? The environment and culture in memory care communities continue to evolve rapidly as new technology and research emerges. Assistive technology, and in particular, assistive listening devices can offer the most significant impact in the prevention and care of dementia residents.

Combating the effects of hearing loss has led to changes in the way memory care communities are designed and how they design their environment and culture.

Hearing loops, for example, are a commonly used system and offer benefits to those with hearing aids in a specific room or area. However, hearing loops are fixed systems, lack portability, and require an expensive installation––learn more about hearing loops in our post The Portable (And More Effective) Alternative to Hearing Loops. The bigger challenge, however, is that only 70% of individuals that should use a hearing aid actually do. These people get no benefit from a hearing loop.

What else can be done to address these problems? How can communities and caregivers maximize residents’ abilities and improve cognitive function if they cannot hear and fully engage? It’s not enough to simply have residents attending events and group programming. They must be able to engage with what is going on around them in order to benefit from group events.

Memory care communities across the country are using Eversound in a variety of ways to engage their residents and offer an improved quality of life for their dementia residents each and every day.

LCB Senior Living offers their Reflections Memory Care Program for residents with dementia. Courtney Allenson, Resident Engagement Director at the Residence of Otter Creek, shares, “We currently use the Eversound headphones for movies and music in our Reflections neighborhoods, where residents with various types of dementia live. The headphones have greatly increased participation due largely in part to the focus of sound…The residents using headphones seem less distracted and irritable and are more engaged in the programming.”

Commonwealth Senior Living based in Virginia offers their award-winning signature memory program, Sweet Memories, to all 23 of their memory care communities. Laura Redilla, the Sweet Memories Coordinator at Commonwealth Senior Living at CMC Norfolk shares how assistive listening technology has transformed their programming and engagement among residents:

Redilla shared the story of a musical performer who came to a recent birthday party: “The residents love him but often seem as though they cannot hear him. I used the system, the mic, and WOW everyone could hear. Feet were tapping, voices were singing, and the entertainer played an extra 30 minutes because everyone was so happy!”

Redilla explains how music has been utilized at meal times for dementia residents: “We also have used Eversound to improve the quality of dining for some residents. The headphones allow the noise to be cancelled out and the music to relax the resident to be able to focus on dinner rather than everything going on around them.”

Those without hearing loss take for granted the simple, daily conversations that happen all the time. For those with hearing loss, these simple conversations become frustrating, often leading to agitation and withdrawal from loved ones.

At Commonwealth Senior Living at Hillsville, these everyday conversations have been given a new life. One-on-one conversations no longer result in such frustration. As Executive Director Kayla Crowder explains,

“We also have a gentleman on Memory Care…He is a resident that is easily agitated and also has problems following cues due to hearing loss. We tried the Eversound equipment on him and he is doing a fantastic job with hearing and following cues. His agitation has also decreased because he can hear only us when talking to him! His wife is also a resident, and has a hard time communicating with him due to his hearing loss. We encouraged her to try using the Eversound equipment to talk to him and they are back to having conversa